The MOST LIKED Photo on INSTAGRAM | EGG WORLD RECORD 🥚

There’s a new world record for the Most Liked Photo on Instagram which is now held by the World Record Egg! Basically an Egg World Record for the most likes on a social media post, and I say this because the account and post numbers continue to climb at staggering rates.

Kylie Jenner Dethroned from Most Liked Photo on Instagram 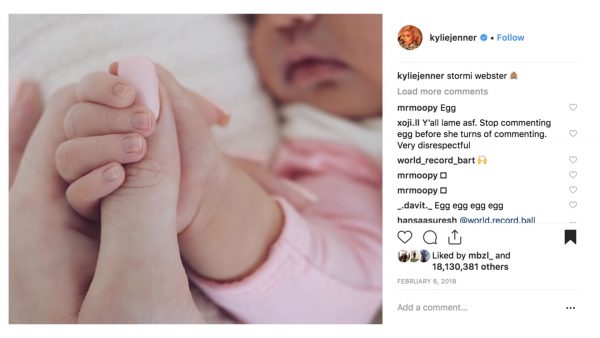 This all began because an online social media influencer (and sister of Kim Kardashian) Kylie Jenner posted a photo on Instagram on Feb 6th, 2018 which became the Most Liked Photo on Instagram, and one of the most viral posts of all time. One individual thought this was outrageous enough to create a spoof account entitled ‘World_Record_Egg’ in order to post a single photo which would then surpass Kylie Jenner’s post and become the new World Record Egg photo on Instagram!

Within 2 weeks the Egg photo had surpassed Kylie Jenner’s photo by total number of likes (near 50million as this article is being published), and the comment total is staggering as well! Oh it doesn’t end there either, the account growth is one of the fasted on social media today boasting over 6million followers within under 3 weeks, and a current growth rate of between 500,000 – 1million followers per day! Of course these numbers will eventually peak, however the following points have been proven